How to hack NFL Game Pass to bypass blackouts 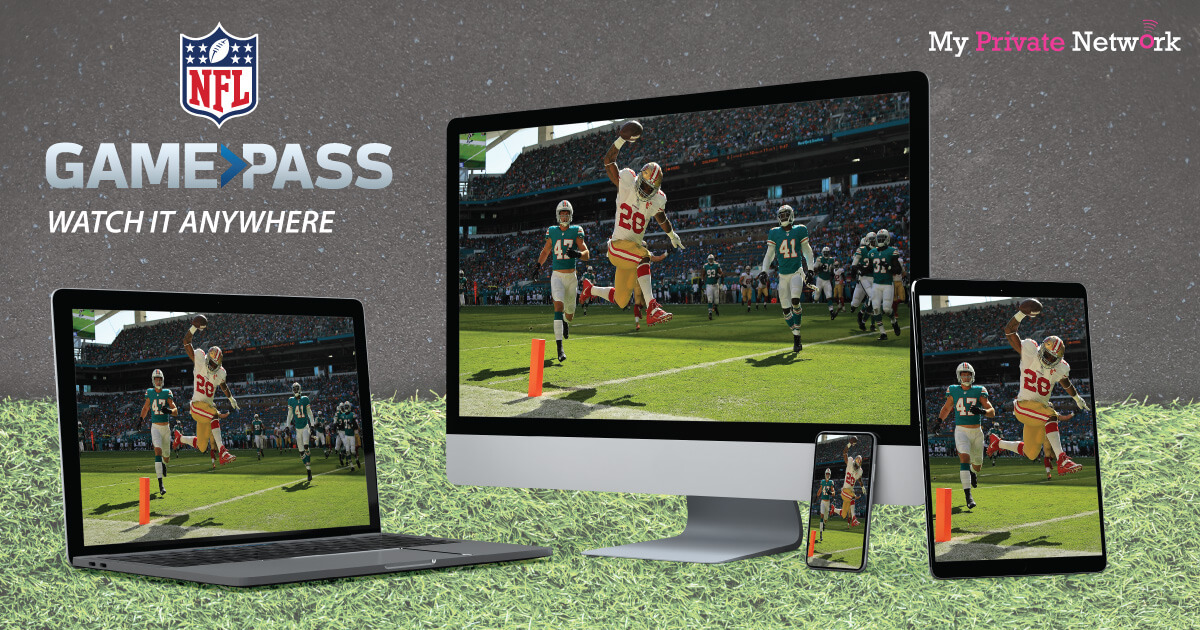 Thinking about getting the NFL Game Pass but can’t deal with the blackouts? Although there are many ways to watch the NFL season, NFL’s Game Pass is still the best way to enjoy the games! If you’re looking for other ways to stream the NFL, check out our streaming guide in the link here:

If you’re living in the U.S, then you probably already know that the NFL Game Pass still subjects you to blackout rules regardless of which Game Pass version you’re using. In fact, the U.S Game Pass won’t even allow you to watch any Live or On-Demand games! On the other hand, there’s the International version of Game Pass (International) which doesn’t come with these restrictions. To be honest, we found the International version to be much better compared to the Domestic version. It includes everything you’ll ever need to catch every single live game easily with tools such as the NFL RedZone and NFL Network 24/7.

In retrospect, the Game Pass (International) is well designed for non-U.S residents. Since the NFL games aren’t available through their local television stations, NFL is able to provide greater value in those regions.

Just like how it is for NBA’s League Pass and NHL.TV, the international version is always better!

There’s a huge difference between the NFL Game Pass available in the U.S and other countries. The most obvious one as mentioned above, would be the ZERO blackouts on the international version. Not to mention, the Game Pass prices and features are also vastly different! Take a look at the screenshots we took for both versions below. 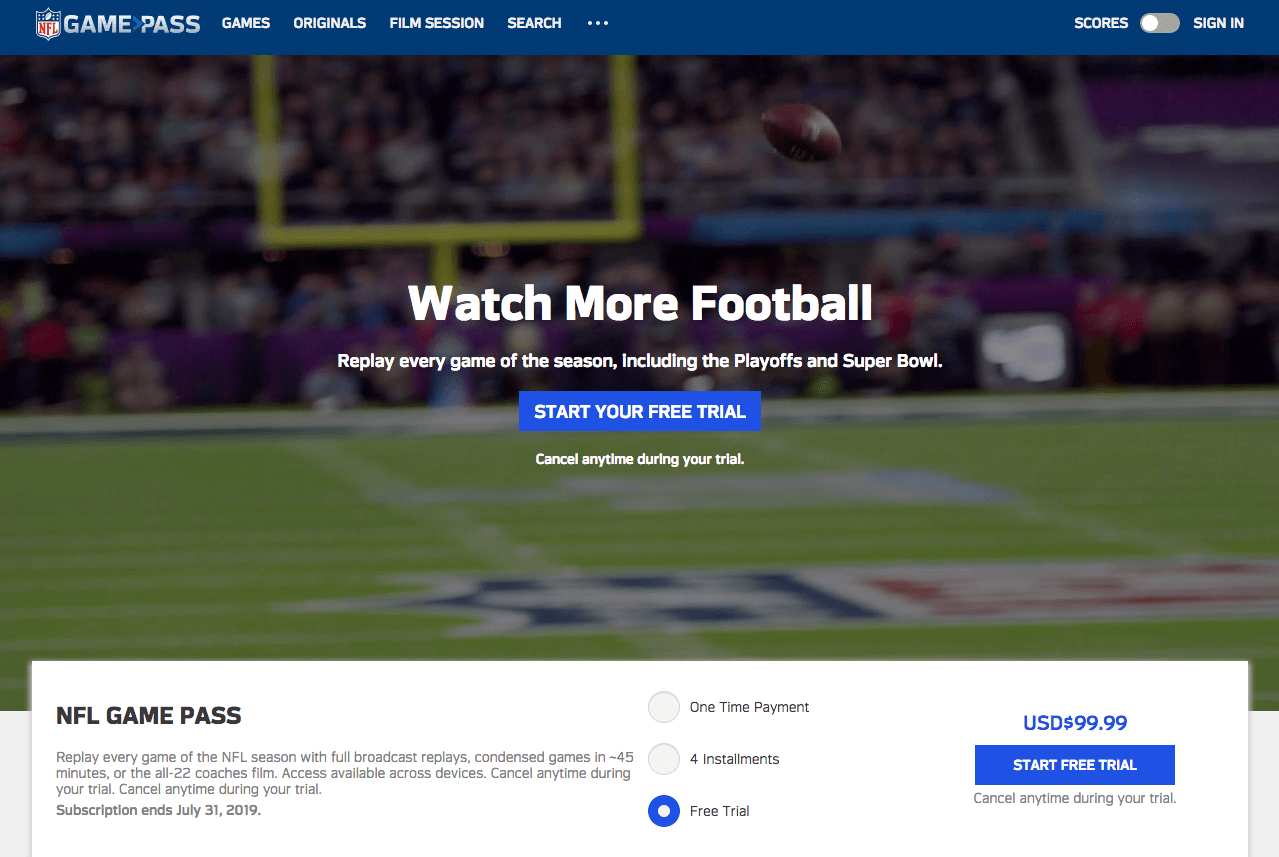 If you’re located in the U.S and headed over to NFL’s Game Pass page, you will find that a subscription is going to cost you $99.99. However the most noticeable thing here is the feature statement which says “Access live out-of-market Preseason games, replays of every game, the NFL Films Archive, and much more”. I’m sure you’d noticed that there is not a single mention of Live or On-Demand access to these games which means that you’ll only be able to access them the moment the day’s games concludes. Basically you’re watching a “replay” rather than actually being “Live”. Bummer!

Note: The NFL Domestic Game Pass is only available in the United States, Bermuda, the Bahamas, Antigua and any U.S territories (including Puerto Rico, American Samoa, the US Virgin Islands, and Guam). 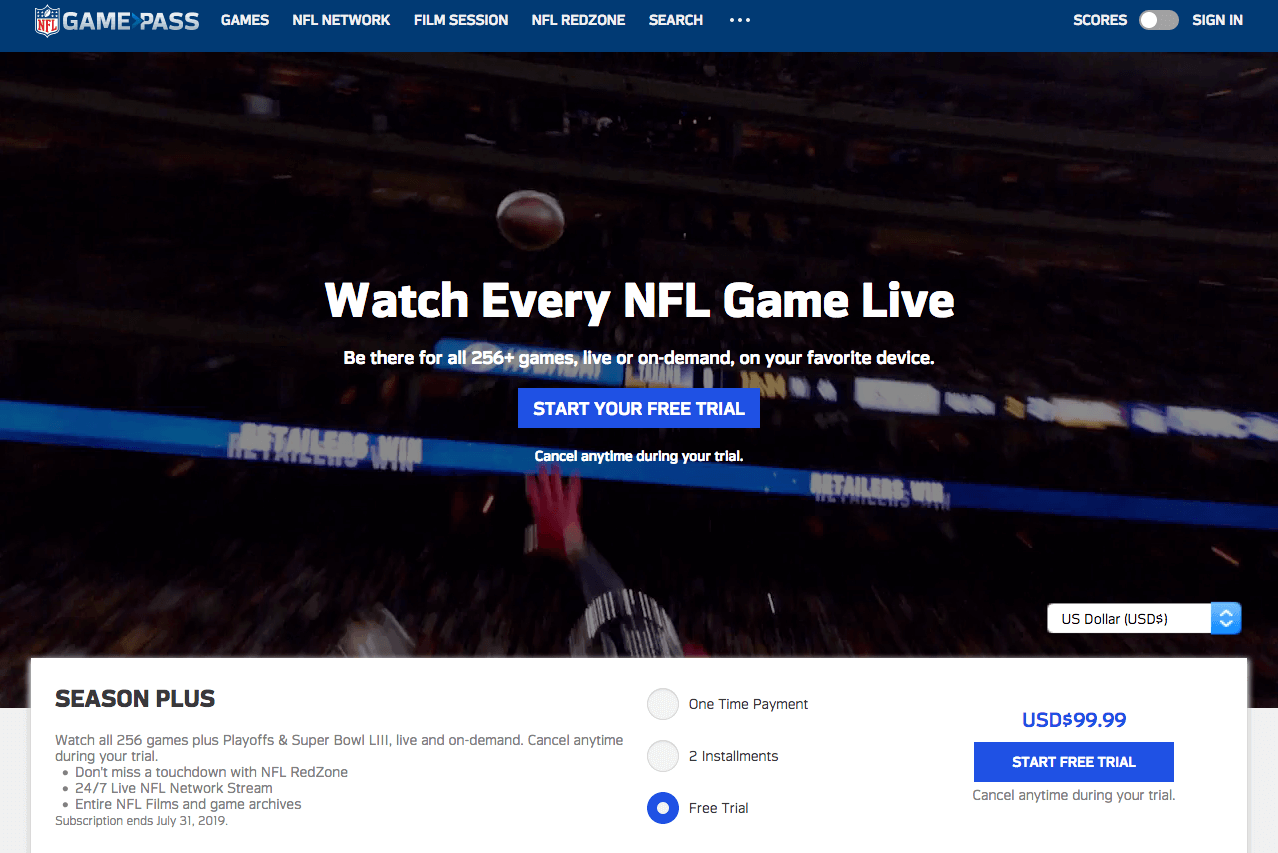 If you’re outside of the U.S and it’s territories and headed back to NFL’s Game Pass page, you’ll find that the page looks different. The international version comes with Live or On-Demand access, the NFL Red Zone, and NFL Network 24/7!

On top of that, you’ll notice the pricing to also be different. It’s more than the $99 Domestic Game Pass charges, but you’ll get the features you really need for some proper football!

Which Country Has The Cheapest NFL Game Pass?

From the table above, the U.S version as well as U.K and Ireland, will all be subjected to blackouts with their versions of Game Pass. However on the international side, you’ll get all Preseason and Regular season games Live or On-Demand plus Playoffs, Super Bowl and NFL RedZone and NFL Network.

Note: NFL RedZone is a Sunday game-day exclusive show that covers every touchdown from every game through the week.
Note: NFL Network is a special show dedicated to American football. It covers content such as off-season developments and news, trades, analysis, the NFL draft, training camps, preseason games, and more.

With the prices ranging from as low as $99 to almost $270, you’ll have to be really picky about which country you’d want to get this season’s NFL Game Pass. Luckily, we’ve checked out the cheapest of them all and have found that Egypt, Indonesia, India, Malaysia and Pakistan offers the cheapest NFL Game Pass available!

How To Hack NFL Game Pass To Bypass Blackouts

You might be asking at this point, “Did we really just sent someone across 19 countries just to test NFL Game Pass?”. No, of course we didn’t, we’ve got a better way. By using our VPN servers located in over 44 countries, we were able to change our devices IP address to that of those countries. As a result, we’d virtually appear to be in another country.

So first things first, you’ll need to use a VPN to connect to another country outside of the U.S.

2) Install our VPN on any device that you’ll be using to watch the NFL games.

The steps here are for users that already have an existing Game Pass subscription and would simply like to avoid blackout. This only applies to UK and Ireland subscribers facing blackouts. For U.S subscribers, unfortunately the Domestic Game Pass (U.S) version doesn’t include Live or On-Demand features so there’s nothing to blackout.

1) Once you’ve setup our VPN service on your device, you’ll need to connect to any country server outside of UK and Ireland.
Note: We recommend to choose a country closest to you to avoid a slower internet connection. For example, if you’re from the UK, you should connect to France (FRA) or Netherlands (NLD).

2) Depending on the device you’re using, you’ll see some sort of notification that you’re connected to our VPN. To confirm this, kindly visit our IP Address Checker and see if the IP address is the correct one. If you’re connecting to France (FRA), you should see an IP address from France.

1) Firstly, connect to our India (IND) servers.
Note: Besides India, you may also connect to our Egypt (EGY), Indonesia (IDN), Malaysia (MYS), or Pakistan (PAK) servers as these are the countries with the cheapest available rates for Game Pass.

2) Then head over to the NFL’s Game Pass subscription page. You will see the price to be at $99.99 in USD$, but you can change it to any other supported currency by clicking on the currency drop-down menu from the top-right corner.

3) Ensure that you’ve selected the Free Trial option.
Note: You might as well take the trial and enjoy an added 7-days free.

4) Click the “Start Free Trial” button to proceed with your order.

5) In the following page, you may either use your existing NFL account or click on the “Create New Account” button to make a new one. Kindly fill up the relevant information and enter your real billing address as designated by your payment card.
Note: Paying with your own credit card, even if it’s not Indian, should not be a problem.

6) Once you’re ready, click on “Continue” to confirm your purchase.

7) That’s it, you’re done! You should now be able to watch any live games while connected to our VPN.

Note: Whilst you needed to connect to India (India) for the cheaper rates, you may not want to do so when streaming live games. As India may be physically further away from your actual location, it’ll take a longer time for the connection to get there which makes your overall internet connection slower. Hence, once you’re done with the cheaper Game Pass purchase, we suggest that you connect to another country closer to you. For example, Mexico (Mex) would be a good choice if you’re located in the U.S.