Is your VPN provider in a “14 Eyes” Country? This is something you should know 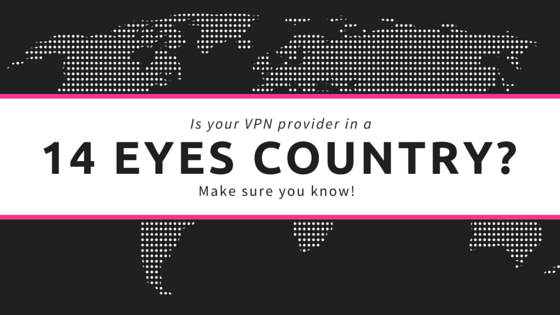 VPN users may or may not have heard the terms “5 Eyes”, “9 Eyes”, or “14 Eyes” by now, but most just know that it’s something bad. To help you understand just what exactly this can mean for your VPN provider, we have decided to break things down for you.

The 5 Eyes countries are the foundation of this network. They are derived from the UKUSA Agreement, which is essentially an agreement to collect, analyse, and share intelligence between these five countries. By setting up a surveillance program called ECHELON (signals intelligence/SIGINT collection and analysis network), the program was initially developed to help the sharing of intelligence on the Soviet Union and China during the Cold War.

Today, it has evolved beyond its military and diplomatic goals after the war to also become a global system for interception of private and commercial communications. Although these countries have agreed not to spy on each other as enemies, they often spy on each other so that a particular country is not caught red-handed. For example, if it is against the law for the U.S government to spy on its own citizens, they might ask the U.K government to do that for them. Here are the 5 Eyes nations:

Once again, the UKUSA Agreement network was extended to fourteen countries. The official name of this group is SIGINT Seniors Europe (SSEUR) with the purpose of exchanging military signal intelligence among these countries – though, this group is commonly referred to as the Fourteen Eyes. The 14 Eyes consists of the 9 Eyes along with these additions:

As it turns out over the past few decades, the intelligence sharing program had created a few other alliances, but the details are murky. In addition to the above 5 Eyes, 9 Eyes, and 14 Eyes nations, here are other countries that may be part of this secretive alliance.

Why not use a VPN provider in the Fourteen Eyes?

Online privacy experts such as privacytools.io recommend staying away from VPN providers based in the Fourteen Eyes, especially within the U.S. In essence, the U.S government could go to a VPN provider and demand access to customer data. On top of that, they can also order the VPN company to not let it’s customers know that this is happening.

An example of this is Lavabit – a discontinued secure email service created by Ladar Levison. The FBI requested Snowden’s records after finding out that he used the service. Since Lavabit did not keep logs and email content was stored encrypted, the FBI served a subpoena (with a gag order) for the service’s SSL keys. Having the SSL keys would allow them to access communications (both metadata and unencrypted content) in real time for all of Lavabit’s customers, not just Snowden’s.
PrivacyTools.io


Where is My Private Network located?

Fortunately, My Private Network is located in Hong Kong; an ideal country for VPNs to be located in as there are no mandatory data retention laws. With no legal restrictions or government involvement, a Hong Kong based VPN company can really focus on their customer’s privacy. For more information on data retention and VPN logging in Hong Kong, check out this article from BestVPNz.